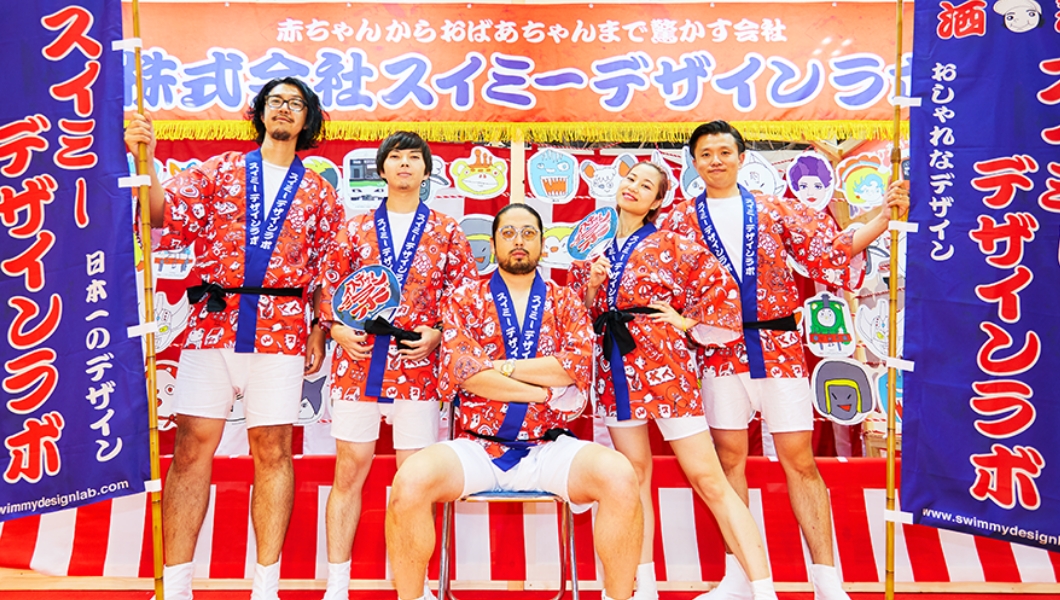 ——Is SwimmyDesignLab a design company?

The answer can be YES or NO, depending on how you define a design company. If you ask whether SwimmyDesignLab is an ordinary design company that simply designs graphics for digital websites, print media or physical merchandise, the answer is “NO.” As mentioned in this company brochure, we do create those kinds of designs, but they are just the face of our business activities. Our creative aspect actually consists more in branding rather than mere design. Accordingly, our main business is branding which involves planning, strategy design and consulting for our customer companies and government bodies as well as for their merchandise.

Then, the question is, what exactly is “branding”? SwimmyDesignLab has defined branding as: “To bring out the full potential of the subject”. To be more specific, we bring undiscovered value of our client companies and their products to light in the most effective way, aiming to assist them to accomplish their goal. Meanwhile, branding may be similar to design since the design business includes the arrangement of information in the most effective manner. In this sense, SwimmyDesignLab is definitely a design company.

When meeting people for the first time, we introduce SwimmyDesignLab as a creative team working together in line with our shared philosophies to design and produce artwork based off of CEO Taku Yoshimizu’s casual art. The concept of Taku Yoshimizu’s casual art is the same as our corporate mission: “To surprise and delight everyone from babies to grannies!” SwimmyDesignLab is a branding and design company which strives to create designs that deliver the same surprise and delight to people of all ages as receiving a surprise gift.

——What are the strengths of SwimmyDesignLab?

As described in the top page of this company brochure, our strengths lie in our original, one-of-a-kind branding achieved by combining the following 4 aspects: Planning and Research, Direction, Casting, and Design and Art. Our originality is also reflected in the huge variety of projects we have engaged in. Generally speaking, a consulting firm usually specializes in one business field. However, instead of being committed to one special area, SwimmyDesignLab is involved in a wide range of industries. This has allowed us to acquire broad connections and information about those industries, as well as to become familiar with the atmosphere which is particular to respective industries and difficult to verbalize.

In this day and age, people’s tastes are increasingly diversified, and more companies and entities are required to take cross-industrily approaches. We believe that, in modern society, being able to provide unconventional business plans free from industry practice and having connections wide enough to realize those plans is our great strength as a branding company. 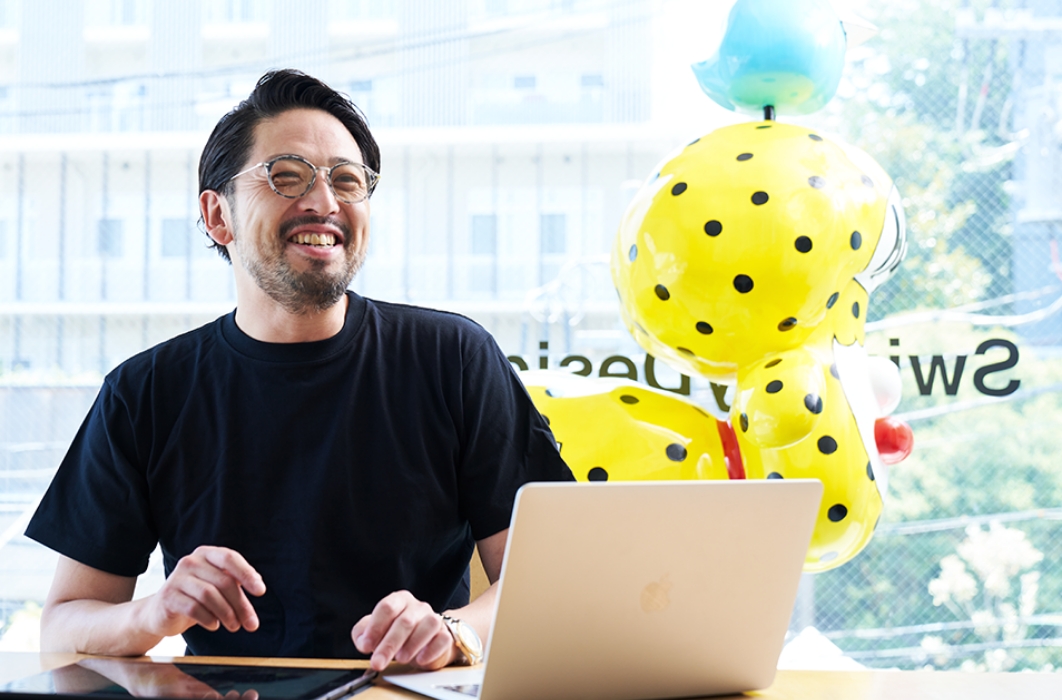 In university, I was drawing alone and making music alone. I wanted to look cool drawing abstract pictures, playing underground music, and doing something technical. Even in the early days of SwimmyDesignLab, I was thinking: “I’m going to use many people like photographers and writers to make the things I want to create.”

However, at some stage, I realized that I had made my creation boring in that way. When you create an object alone, it never goes beyond your imagination. It is depressing when people do not understand what you have created. Without a doubt, it is much more rewarding to create something that delights many people with a team that enjoys working together. Thus, now I draw and design things that are easy to understand and make everyone happy. Meanwhile, my thinking has also changed, and now I feel like I am supported by my team and partners who help me realize what I want to achieve.

In this sense, I think that SwimmyDesignLab is like a band. There are key band members, and we invite support members ideal for each stage (project). In most cases, a band’s support members are not temporary staff. They work together for mid-to-long term, building up a trusting relationship to create music together. I hope that SwimmyDesignLab will be like a music band, and gather people for a while to enjoy jam sessions.

SwimmyDesignLab’s ultimate goal is to “Surprise and delight everyone from babies to grannies!” with our creations made in collaboration with our staff and partners. In order to surprise and delight people from babies and grannies, it requires kindness, consideration and care for those people. That is, love. SwimmyDesignLab hopes that the world will be full of people who communicate with each other with love. We will be delighted if people notice the love we’ve filled our creation with when they come across them. 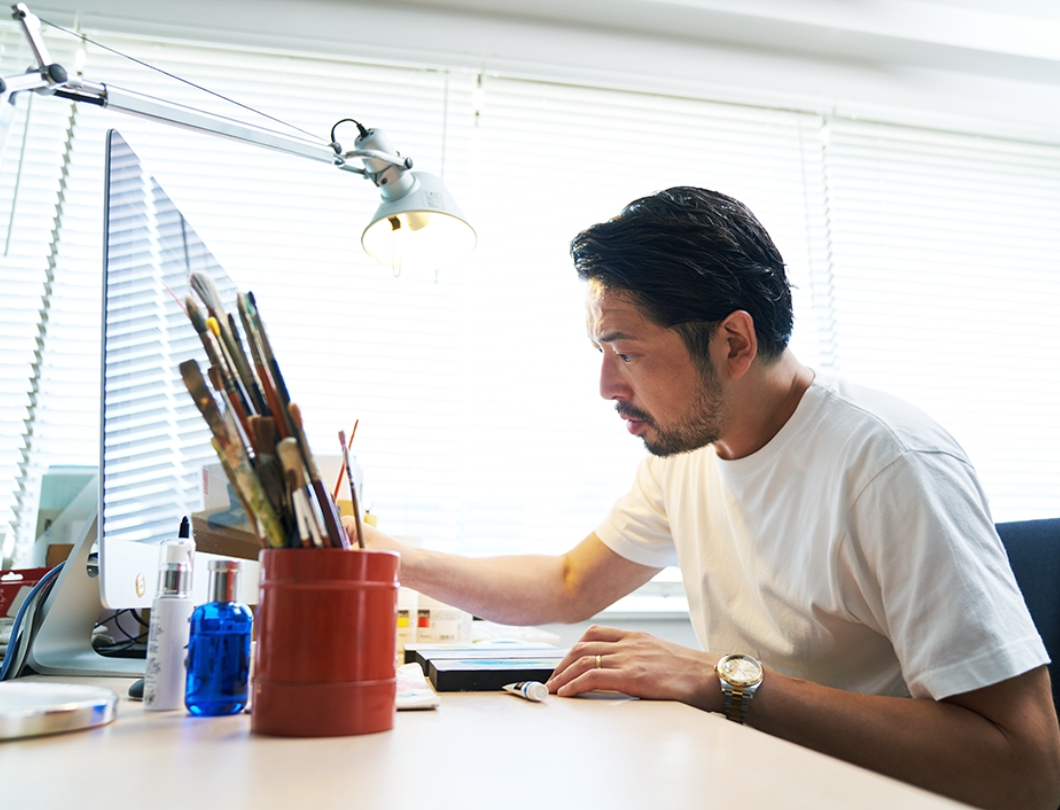 ——When did you start drawing?

I’ve always liked drawing since I was small. Back then, I drew characters from manga and anime as well as pictures of animals and my family. I started drawing seriously when I went to the United States and studied art in university. That’s where I met Tadashi Moriyama, who also went on to become an artist and is currently based in Los Angeles. He was always drawing abstract pictures, which influenced me to try out a more abstract style as well at that time.

——What made you change your style of art?

In the beginning, SwimmyDesignLab received orders mostly from the apparel industry. When the order included graphic design, I used to design in a rather serious attitude. However, when I designed an animal pattern for textile in a relaxed manner just on a whim, the design became popular among the apparel’s customers and SwimmyDesignLab received more orders for similar designs. That was the turning point.

I began drawing animals based only off of my memory, without consulting reference books or anything. I drew them freehand without advance preparation, and did not even amend my drawings. I did not feel stressed drawing that way. Actually, I found it nice. I found that this drawing style allowed me to express my ideas and messages without overthinking or pretending, and I came to like drawing even more.

——Is there anything you are careful about when you draw?

I don’t try to draw well. Adults tend to try to draw so that their pictures have perfect figures and are not out of perspective. In contrast, children don’t try to make their drawings look good but draw as they see or feel. I believe the virtue of drawing is that anyone can express their own perception or feelings. However, if you draw in the way that adults do, you start evaluating your drawing based on its “correctness”. Whether I was drawing abstract pictures or making only trendy designs, few people understood my art, which was stressful and depressing for me. From this experience, I started to avoid drawing well, in hopes of expanding my appeal that more people can enjoy my art.

——What do you think people expect in your drawings?

I feel that a considerable number of our clients have chosen SwimmyDesignLab with the hope of expanding their target customers. According to my own analysis, my drawing style stands somewhere between authentic art and casual illustration. Therefore, photographs as well as characters from anime and manga redesigned in my style can turn accessible and attractive even to those who did not care about them. Plus, I try to make my drawings full of fun and happy vibes, which I believe is one of the reasons that many clients like our design.

——What is your next goal?

Currently, I draw pictures mostly for work. Therefore, I would like to draw purely for my own sometime in the future. Actually, as a first step, I am thinking about holding exhibitions both in Japan and abroad in 2023. Please look forward to it. 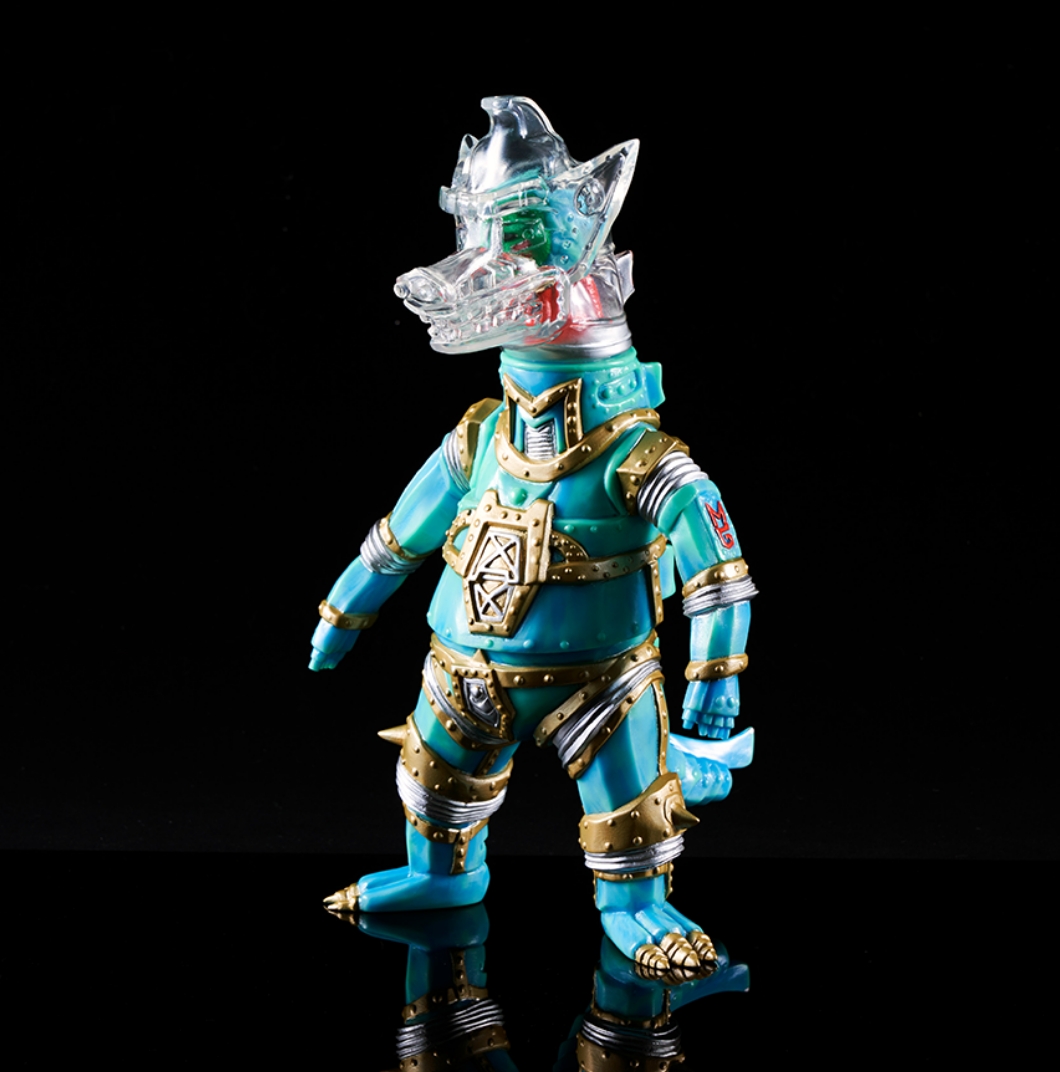 ——What made you go on to making Sofvi (PVC figures)?

Like everyone else of my generation, I used to play with Sofvi (PVC figures) of Ultraman and Godzilla as a child. I stopped playing with them during my teenage years, but later in my 20’s, I gradually got into PVC figures again. In my mid-30’s, I started to collect PVC figures quite seriously. I loved them so much that I began making my own PVC figures to suit my tastes. Then I felt it would be nice to have someone to play with. This is why I started to design, manufacture and sell original PVC figures.

——What are the features of SwimmyDesignLab’s PVC figures?

In order to give them the typical characteristics of PVC figures, we manufacture our products by traditional slush molding. Although making PVC figures having sharp points or flat faces with slush molding is difficult, this restriction actually gives PVC figures their soft, heartwarming vibe. We also try to paint the figures as little as possible and make use of the original color of the PVC. The resulting PVC figures might be rather “lo-fi” and regarded as less valuable than modern figures. However, as children show us, the fact that we can feel affection or attachment towards insignificant things with no monetary value is what makes those things really treasurable. This is exactly what we aim to realize through our PVC figures. 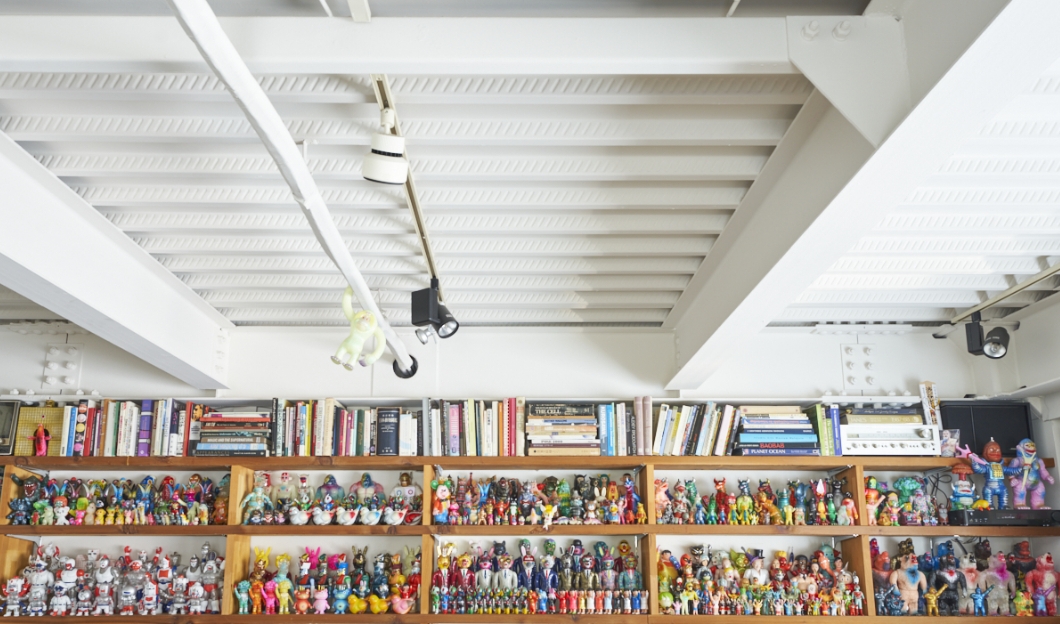 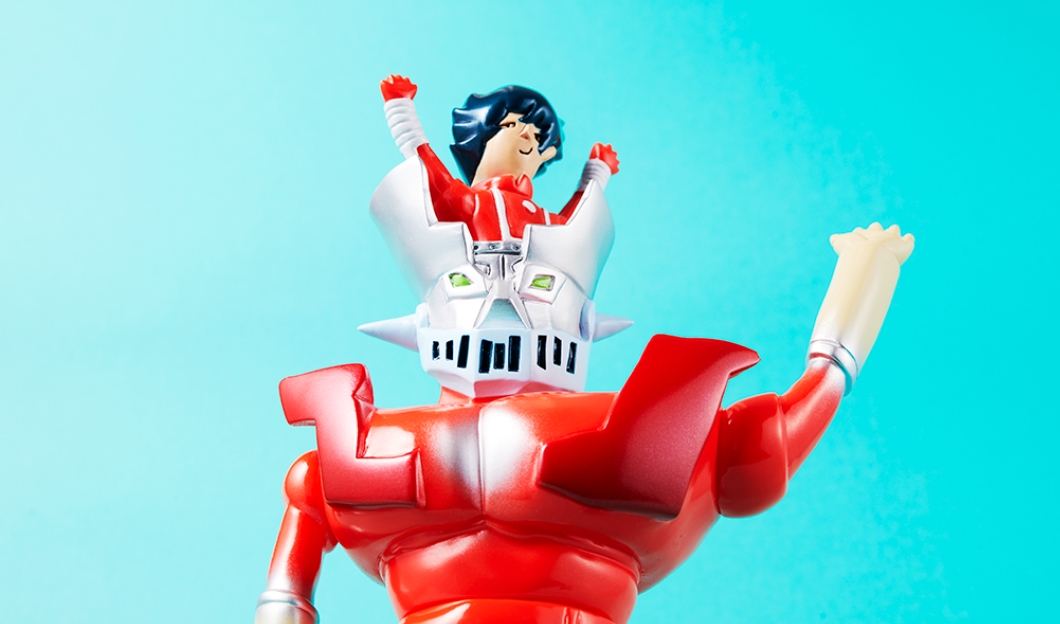 ——Has the PVC figure business had any influence on you?

I design the PVC figures, but most of the production processes such as prototype making, wax making, molding and painting are outsourced. Notably, Mr. Kaneko’s skill for creating prototypes is just amazing: he can produce a perfect 3D model based only off of two drawings of front and back views of the figure. Actually, I usually like to do everything myself as far as making products is concerned. However, with regard to PVC figure production, I can be at complete ease relying on others because I know they will create products beyond the “perfect” PVC figure I can picture in my mind. This brings me joy that I haven’t experienced in other creative fields such as design, drawing and music.

——Has the PVC figure business had any influence on SwimmyDesignLab?

To be honest, I started making PVC figures not really for business but rather for myself. However, although the PVC figure sector is quite small, what I was doing for fun received high praise and found many customers. This new business has also connected us with a lot of people, who have enabled our PVC figure to become business commercially viable. This cycle may be the perfect example of SwimmyDesignLab’s mission, vision and values. Among our business areas, the PVC figure business especially allows us to directly feel the reactions of end users. My desire for producing PVC figures that will amaze people also serves as the driving force of my creativity, which clearly has a good impact on the other fields of our business.